A Review of Tip-based Nanofabrication

Nanotechnology is revolutionizing many crucial technologies in our society such as faster and smaller transistors for more powerful circuits, faster and lower-cost DNA sequencing, early disease diagnosis, higher-efficiency energy conversion, and high-density memory storage, etc. All these fantastic technologies rely upon the capability of fabricating these nanostructures, nano-devices, and nano-systems. For example, semiconductor manufacturing is powered by high-volume processing lithography method using light with smaller and smaller wavelength to produce billions of transistors. This type of lithography technology also demands accompanying technology for flexible low-volume production, mask fabrication and prototyping of the next-generation devices. The dominant mask production is to use the electron-beam lithography. In parallel to the beam-based nanofabrication technology, tip-based nanofabrication (TBN) technology is also receiving renewed interests because of their flexibility of handling novel materials and their capability of reaching atomic scale. Tip-based nanofabrication is a nanofabrication technology that uses a nanoscale tip to interact with a substrate for fabricating nanometer-scale patterns. It can be categorized based on the platform it is implemented: an atomic force microscope (AFM) or scanning tunneling microscope (STM).

Tip-based nanofabrication (TBN) traces back to the invention of the scanning tunneling microscope (STM) by two IBM scientists. In STM, a sharp metal tip with several nanometers dimensions approaches the substrate, while monitoring the tunneling current between the tip and the substrate. The tunneling current increases when the tip approaches the substrate. By controlling a constant tunneling current by moving the tip up and down when scanning along a surface, the distance between the tip and the substrate can be kept constant. Therefore, the movement of the tip at each spot can represent the topography of the sample. Accidentally, when scanning a sample, contaminations can be observed on the substrate, which leads to the idea of fabricating nanostructures using this nanoscale tip and eventually to this concept of TBN. Later, silicon microcantilever with a tip was used and tip-substrate interaction forces were used to control the distance between the tip and the substrate, the atomic force microscope was invented which applies not only to conductive surfaces but also to non-conductive surfaces, extending the applications to biology and chemistry.

Based on the platform the TBN technology is implemented, it can be categorized into two types：AFM-based and STM-based. 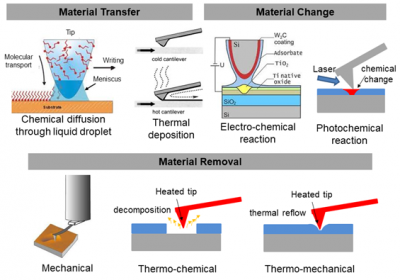 This type of TBN technology uses the AFM as the implementation platform. The tip is normally mounted on the free end of a microcantilever. A laser beam is incident upon the backside of a microcantilever and reflected back to an optical quadruple for measuring the deflection of the microcantilever. The deflection feedback helps the control circuits to keep the tip in close contact with the substrate with nanometer resolution in the z-axis. According to nanopattern formation mechanisms, it can be categorized into three schemas: (i) the material transfer, (ii) material change, and (iii) material removal. Figure 1 shows the major TBN technology using AFM as the implementation platform. In the material transfer scheme, the material is delivered to the substrate through the tip. It can be through the water meniscus naturally formed between the tip and the substrate by diffusion [1] or can be through thermally-induced surface tension [2]. In material change type, the nanopatterns come directly from the chemical change of the substrate induced by the tip. It is either through electrochemical reaction taking place within the water meniscus [3]or due to the photons surrounding the tip causing photochemical reaction [4]. In material removal type, the material is removed from the substrate to form the nanostructures. The material removal can be initialized by scratching the tip across the substrate, using mechanical force to cause material removal from the substrate [5, 6]. Or it can be caused by an AFM tip locally heating up the resist to sublimation [7, 8]. Or it can be a heated tip to cause local thermal reflow of the resist [9]. IBM demonstrated a storage technology based on a thermal tip array that reaches the storage density of 200 Gb/inch</math>^{2}</math> in early 2000 [9].

Figure 2. Two mechanisms of STM-based TBN technology. (a) Atom moving type is to move atom to the desired site. (b) atom-replacing type can replace the substrate atoms with atoms of different elements, providing more opportunity in fabricating atomic-resolution devices.

This type of TBN technology used the STM, wherein a tunneling current between the tip and the substrate is constantly monitored to work with the z-axis piezoelectric stage in synergy to control the tip-substrate distance to nanometer resolution. The tip is normally a chemically etched sharp metal tip with a single atom or several atoms at the apex of the tip. Scientists demonstrated that at low temperature, by controlling the current, the atoms can be moved across the substrate[10, 11]. There are two approaches to move atoms. The first approach is to drag the atom along the substrate surface while the atom remains in contact with the substrate. Eigler and Schweizer from IBM demonstrated positioning of xenon atoms to form an IBM logo on a single-crystal nickel surface at a temperature of 4 Kelvin[11] and high vacuum. The second approach is to pick up the atom, move to a different site, and release the atom to a different site[12].

To build functional atomic-scale or molecular devices, atoms of different elements are needed. A very useful technology was developed by Lyding et al. that is capable of removing hydrogen atoms from a (100) 2[math]\times[/math]1 silicon substrate [13], laying the foundation for the later so-called hydrogen depassivation lithography (HDL) [14]. But the overall speed of STM-based TBN is very slow, the tip moving speed in positioning atoms is around 0.4nm/s. In addition, the sample is normally limited to conductive surfaces. Moreover, the high vacuum needed for STM and low temperature also limits the application in non-conductive surfaces and also biological applications.

Table 1 summarizes several key aspects for representative TBN technologies aforementioned. The features include lateral resolution, speed, directly-processed material choices, requirements of vacuum and humidity control. In terms of lateral resolution, STM-based TBN that can manipulate single atom provides atomic resolution fabrication while all the other TBN technology have a similar resolution ~10nm. In terms of the speed, thermal- mechanical and thermal-chemical have the fastest speeds because of the nanostructures are formed by fast thermal-reflow or a chemical reaction induced by the tip. DPN, thermal DPN, and mechanical-removal TBN rely on material transfer which takes longier time to complete. In terms of the materials that TBN can process, STM-based TBN can only process conductive surfaces such as metal, semiconductors, and graphene. AFM-based TBN has wider choices of materials covering both conductive surface and non-conductive surfaces including polymer and biology materials. In terms of the environment control needed, STM-based TBN requires high vacuum while AFM-based TBN can operate in ambient conditions except for DPN and Electrochemical TBN because these two TBN technologies rely on the water meniscus between the tip and the substrate. The size of the water meniscus is highly dependent on the humidity and determines the dimensions of the formed nanostructures. 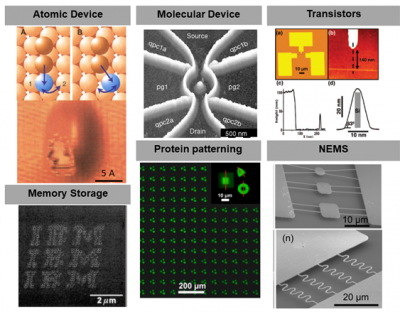 TBN can be applied in high-density memory device achieving a density of 200Gb/inch2 due to the small features the tip can thermally indent and remove[9]. TBN can fabricate atomic-precision devices such as quantum dots and molecular switches. TBN can also compete with conventional nanolithography technology such as electron beam lithography for fabricating devices with ten to several hundreds of nanometers dimensions. For example, TBN can make nanoelectromechanical systems (NEMS) such as a mechanical nano-resonator[28] and nano-transistor [21]. TBN can also be used in patterning biological objects such as fluorescent antirabbit IgG [29].

Currently, it is difficult for TBN to compete with optical lithography for volume production due to its limited scalability. Parallel processing is the route for increasing the scalability of TBN. For certain applications especially in chemistry and biology, where only simple identical nanopatterns such as nanodots are needed, polymer pen lithography[30] and beam-pen lithography[31] can provide millions of nanopatterns in a single step satisfying the big volume requirement. However, these two technologies are incapable of producing different types of nanopatterns across tips. For some applications where different nanopatterns are to be fabricated by different tips, individually controlled tip arrays are required. Several groups have demonstrated parallel microcantilever arrays to achieve this task [9, 32, 33].

Tip wear and tip geometry variation are the two critical issues affecting the fabrication uniformity and reliability for TBN. First, tip wear can make the tip geometry change over time, therefore affecting the size of nanopatterns fabricated. This issue can be overcome by coating the tip with wear-resistant materials such as amorphous diamond [34] or using a solid diamond tip [35]. Second, tip size can vary because of the fabrication process limitation. In some application, the tip used is even less than 10nm, making it extremely difficult to produce a tip with well-controlled dimension at this size range. Therefore, producing tips with controlled geometry is also demanded. Kaya et al. developed a process of fabricating identical tip radius that is helpful for promoting the uniformity [36]. Dai et al. used a carbon nanotube attached to a tip to act as super sharp tips[37], which could also be a promising route to achieve a reliable tip geometry since nanomaterials such as carbon nanotube or nanowires can be sorted before attaching to the tip end.

TBN has the benefits of the built-in capability of imaging. In many TBN technology, if the fabrication scheme can be turned on and off, then this can lead to many promising applications that require good alignment capability. For example, for thermal deposition, a tip can act as a normal AFM tip to scan the sample to get topography image, then a desired tip scanning path can be set to selectively deposit ink nanopatterns to the desired locations on the sample. This is extremely useful for fabricating nanodevices that have several different layers and need precise alignment. In addition, after TBN fabricating the nanostructures, the tip can also scan the nanostructures to check the quality of the nanostructures.

To fabricate functional nanodevices, TBN needs to be compatible with conventional micro/nanofabrication processes. Martinez et al. demonstrated nano-transistors with the use of electron beam to make electrical connections using electro-chemical TBN [21]. Hu et al. combined thermal deposition based TBN with conventional UV lithography for fabricating nanodevices such as mechanical nano-resonators [28], nanofluidic channels[38] as well as graphene nanoribbon transistors [24]. Huang et al. a photo-responsive transistor with the DPN method [39]. These results all show that TBN can have good processing compatibility with existing micro/nanofabrication processes.

TBN, to be qualified as a manufacturing technology producing reliable and uniform nanostructures in high throughput, many challenges exist such as tip uniformity, tip wear, parameter control, scalability. However, there are several promising research directions in which TBN has its unique advantages.

First, as a top-down nanofabrication approach, TBN has great alignment capability, can fabricate nanodevices that requires super-precision alignment. Second, TBN, especially the AFM-based TBN, normally uses the conventional micro-cantilever structure with the tip at the front. New features or functionality can be added to the micro-cantilever structure through microfabrication to empower more capability of TBN. Third, due to the AFM imaging capability of biological samples that can position the tip within nanometer lateral resolution, biomolecules such as DNA can be cut into arbitrarily shaped patterns by the AFM tip [40]. More applications in biology will emerge with the development of AFM equipment with faster-speed and better lateral resolution as well as more functionality added to the AFM tip.

The author would like to acknowledge the faculty start-up funding provided by the ZJUI Institute (the joint-institute by Zhejiang University and the University of Illinois at Urbana-Champaign) at Haining, Zhejiang Province, China.